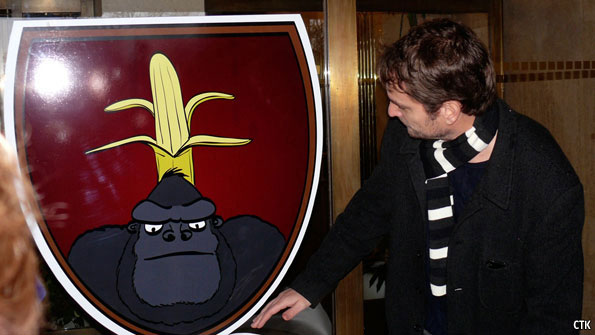 THE "invisible gorilla" experiment (follow the link if you're unfamiliar with this remarkable study) is a useful reminder of how easy it can be to miss what should be obvious. Similarly, the gorilla of sleaze has regularly been an important player in the cosy world of Slovak politics. But too often few Slovaks have chosen to notice it.

“Gorilla” is the codename given to a wiretapping operation in 2005-06, the details of which were, it is alleged, revealed in a secret-service file leaked on to the internet in December. It has shaken Slovak politics to the core.

The file, supposedly compiled by the Slovak Information Service (SIS), does not contain direct transcripts of the wiretaps, but purports to provide raw intelligence based on them. It discusses privatisation deals conducted during the second term of Mikuláš Dzurinda, a reformist prime minister in office between 1998 and 2006 (and foreign minister in Iveta Radičová's current caretaker government).

Some Slovaks have interpreted Gorilla as an unwelcome reminder that the dodgy links between politics and business that thrived in the 1990s, an altogether murkier period in Slovakia, may not have been entirely severed. Today hundreds of Slovaks threw eggs and bananas at the parliament building in protest.

At the heart of the scandal lie allegations that bribes worth millions of euros were paid to officials to win various public-procurement and privatisation contracts. Former ministers, representatives from Austrian, French, Italian and Russian multinationals, and tycoons from Penta, an investment fund dubbed the “fifth coalition partner” in Mr Dzurinda’s second government, are all named in the file. So are all four political parties in Mr Dzurinda's second coalition government.

The intelligence in Gorilla insinuates that Anna Bubeníková, head of Slovakia's state privatisation agency, acted as a go-between for Penta and foreign investors. She is supposed to have attended meetings in a “safe apartment” in central Bratislava and an obscure hotel in the Tatra mountains. Ms Bubeníková was sacked earlier this month. She denies any wrongdoing.

Penta, which employs more than 25,000 people and took in €2.1 billion in revenues in 2010, is one of the dominant investment players in Slovakia’s small market. One of its rivals, J&T, is known for having hobnobbed with members of the centre-left party Direction-Social Democracy (Smer-SD), led by another former prime minister, Robert Fico. Both funds have been aggressive bidders for most public-procurement contracts in Slovakia.

A spokesman for Penta told me that the group denies any involvement in criminal activity. He suggested that the release of Gorilla was designed to intimidate specific (but unnamed) individuals ahead of a general election on March 10th. He says that of the 12 business deals described in Gorilla, Penta took part in only six, and that it won contracts only when its bid was demonstrably the strongest. He added that the group would be taking legal action to protect its reputation.

The Gorilla file has been known to various insiders for some time. In 2009 it reached Tom Nicholson, a prominent investigative journalist, who claims that the security services offered him “millions” to drop it. In the end he was unable to find a media outlet prepared to publish it without corroborating evidence.

Freedom and Solidarity (SaS), a free-market newcomer on the Slovak political scene and a member of the four-party coalition government that collapsed in November, has admitted that it had the Gorilla file ahead of the last general election, in 2010.

On December 23rd, days after Gorilla's publication, SaS issued a formal complaint to the Office for the Fight Against Corruption, a unit within the Slovak police. A week later the general prosecutor's office said it would set up a team to investigate the claims in the file. On January 9th Daniel Lipšic, the interior minister, put together an investigative team to look into the issue.

Some have questioned the file's authenticity. Mr Dzurinda has said that the entire thing is a fabrication. All the political parties implicated have rebuffed allegations of corrupt dealings. Politicians under suspicion have pooh-poohed Gorilla as kompromat timed to discredit them before the election. (Waggish critics responded by placing a sticker depicting Slovakia’s coat of arms with a gorilla in it at the entrance to the parliament building.)

It is certainly true that no corroborating evidence, such as audio recordings, has come to light. But various statements from officials are chipping away at the doubts. The interior ministry confirmed last week that a wiretapping operation codenamed "Gorilla" took place, and that it was legal. A former senior anti-corruption police officer and a former head of the National Security Bureau have said publicly that the file is authentic and that the information in it is likely to be true.

On January 11th Jaroslav Spišiak, the police chief, told a newspaper that "developments could have happened in the way they are described" in Gorilla. This week Ivan Gašparovič, Slovakia's president, approved the questioning of Karol Mitrík, the SIS director, who is usually bound by an oath of secrecy.

For Mr Dzurinda, a giant on the Slovak political scene, the allegations that massive corruption in public procurement took place on his watch may now spell his political end. (There have been no suggestions that he took bribes himself.)

SDKÚ, which has dominated centre-right Slovak politics for a decade, has plummeted to 8.3% in one opinion poll, down from 15.4% in 2010's election. Other centre-right parties who served in Mr Dzurinda's government have also suffered losses of confidence.

It is not only the centre-right that has been embarrassed by Gorilla. Mr Fico is described as visiting the safe flat in Bratislava to discuss purges in his party and financing with Penta’s co-owner, Jaroslav Haščák. Smer-SD is known to have received about SKK 1.2m (around €40,000) from Penta magnates in the early 2000s. Mr Fico has said that he might have met Mr Haščák, but has made no comment on the content of their meeting.

Still, such funding is not illegal under Slovak law, and Mr Fico has long since cut ties with Penta. In 2008 he said that he likes financial groups “as a goat likes a knife”. After taking power in 2006 his government gave Penta a public rap on the knuckles by cancelling the privatisation of Bratislava airport.

Indeed, Mr Fico looks poised to win a landslide victory in the upcoming election. If the results of one recent poll were repeated on election day Smer-SD would win 81 of the 150 seats in parliament, giving it a healthy majority. No party has ever governed alone in Slovakia since the country threw off its communist shackles.

As the centre-right is dragged through the mud, Mr Fico is likely to gain from the ensuing drop in turnout, as are political novices such as SaS and other fresh faces. SaS fell out of favour after toppling Ms Radičová’s cabinet from within over the euro last autumn, but the Gorilla scandal may help it rally.

The gorilla has been spotted, but it is unlikely to leave.